The Light We Left Behind by Tessa Harris - Book Review 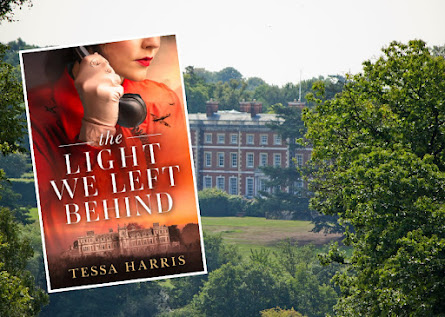 Title – The Light We Left Behind: A totally gripping and heart-breaking ww2 historical fiction novel, based on a true story

When psychologist Maddie Gresham is sent a mysterious message telling her to report to Trent Park mansion, she wonders how she will be helping the war effort from a stately home.

She soon finds captured Nazi generals are being detained at the house. Bugged with listening devices in every room, it’s up to Maddie to gain the Nazis’ trust and coax them into giving up information.

When Max Weitzler, a Jewish refugee, also arrives at Trent Park with the same mission, Maddie finds herself trapped in a dangerous game of chess.

The two met in Germany before the war, and Maddie’s heart was his from the moment they locked eyes. The hope that Max had escaped the Nazi threat was her guiding light in the darkness of war.

But Maddie has finally gained the trust of the Nazi officers at the house, and her love for Max must remain a secret.

Sometimes walls not only hear, but also keep many secrets, like the walls of the Trent Park.

Maddie is a young English girl who dreamed of becoming a psychologist, committed criminal acts against the Reich in Munich. After her arrest she was deported from Germany to Britain, separated from her beloved Max.

Here a story that will not leave you calm, begins.

Maddie has signed an official secret act and begun to work in the Trent Park that is better known as a luxury prison for German generals.

I had never heard of the Trent Park before reading this book, and I was so surprised to learn about its existence, about the purposes of this prison and the activities carried out in it. The book provides full information about it.

I had different feelings while reading the book. Some moments made me boiling with anger, some happy moments were like a balm for my soul.

I liked Maddie. Her loyalty to her beloved, the fight for justice, kindness and honesty are worthy of respect.

I would gladly recommend this book to fans of historical fiction, History and women fiction. I'm sure you will enjoy the book as i did.

Thanks to Tessa Harris, HQ Digital and NetGalley for the opportunity to read and review this book!

MY FAVORITE QUOTES FROM THE BOOK

~ "Correction does much, but encouragement does more."

~ "None are more hopelessly enslaved than those who falsely believe they are free."

~ "Everyone needs someone to fight their corner; to be on their side. Someone they can count on in times of crisis, even if it's just for a chat, or a walk or the occasional supper to help one relax."

~ "This war will be won with brains, not brawn."

~ "We're all juct pawns in the government's game of chess."

When I was five years old, I visited the dungeons of an old castle with my parents. The guide was telling us about the oubliette, the place where they threw prisoners and literally forgot about them. Without warning he turned the light off, plunging the space into darkness. We were blind for a few moments. But instead of terrifying me, the experience had the opposite effect. I wanted to know more about people, lives, events from the past. So,from a very early age, I loved history: buildings, books, stories.

I went on to read History at Oxford University and qualified as a journalist and editor, contributing to several national publications such as The Times and The Telegraph. I also acted as a literary publicist for the English TV presenter and novelist Pam Rhodes.

Winning a European-wide screenplay writing competition led to the optioning of a screenplay. (Here's where the history comes in.) Set in 18th century England, it highlighted what has to be one of the most fascinating periods of England's past. The screenplay languished in what's known as development hell, but I was determined to tell some of the stories I'd discovered during my researches into the period. The result is "The Anatomist's Apprentice," the first of a series of Dr Thomas Silkstone Mysteries - stories from late 18th century England that are based on true events.

Until December 2010 I was editor of a regional glossy magazine and was regularly heard on BBC local radio. As well interviewing dozens of celebrities, I interviewed writers at literary events in front of audiences. My most recent interviews were with Oscar winner Julian Fellowes (who wrote the screenplay for Downton Abbey), Barbara Taylor Bradford and Hollywood legend Leslie Caron.